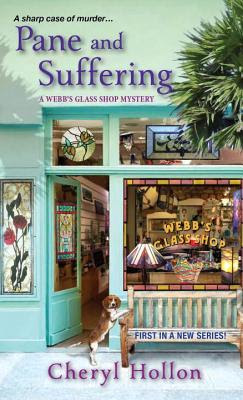 The first week of October is Get Organized Week!  So here is a good opportunity to organize your house (or forget about it and read a book).  I will think about it!  I do have that studio to clear out and turn back into a living room (just seems so daunting)!  Isn't the above cover just adorable?  The little dog pictured on the cover is called Rooney.  He is a Weinmaraner puppy.

Pane and Suffering by Cheryl Hollon is the first book in her new A Webb’s Glass Shop Mystery series.  Savannah Webb has spent the last few years in Seattle studying at the Pilchuck Glass School.  She had to return home to St. Petersburg, Florida due to the passing of her father, John Webb.  She was told that he had a heart attack which made no sense.  Her father was in good shape and did not have a heart condition.   Savannah enters the glass shop on Monday to sell the shop to her father’s longtime friend and co-worker, Hugh Trevor.  When Hugh does not show up before the scheduled class, Savannah starts teaching it.  Then Jacob Underwood, apprentice, enters the custom workshop and finds Hugh dead.

The officer assigned the case (a blundering and incompetent idiot) does not believe it is a crime.  Savannah cannot believe that two people from Webb’s Glass Shop died of a heart attack within days of each other.  Then she finds a note that her father left for her.  John Webb was a cryptographer during the Cold War and taught Savannah ciphers.  He has left her clues to follow to find the person that killed him.  With the help of her new friends Edward Morris (owns Queen’s Head Pub) and Amanda Blake (new assistant manager at Webb’s Glass Shop), Savannah sets out to find who hurt her father and Hugh Trevor.  Will she be able to convince the police that they were murdered?  Will they be able to find the murderer before he takes another victim?  And why were those two people killed?  What will Savannah decide to do in the end?  Go back to Pilchuck's Glass School in Seattle and run her Webb's Glass Shop?

I enjoyed Pane and Suffering.  It was a fun book to read.  It started out at a fast pace and just slowed down some in the middle.  The books was easy and fun to read.  I like the characters (Savannah, Edward, Amanda), the setting (St. Petersburg, Florida—I am about an hour or so from this city), and the ciphers (I really liked the ciphers probably because I like puzzles) as well as the geocaching.  I have only seen one other cozy mystery use geocaching.  There is some interesting information on stained glass.  I happen to find stained glass beautiful and fascinating.  A lot of work goes into creating these beautiful pieces.  I found the murder mystery to be a medium level mystery (though the author was clever).  I was able to solve it before I was halfway through the book despite the authors attempt at misdirection.  I cannot wait for the next book in this series.  I give Pane and Suffering 4.25 out of 5 stars.  I think Pane and Suffering is a very good start to a new mystery series. The next book in the series is Shards of Murder.  It will be out on February 23, 2016 (according to Amazon which is subject to change).

I received a complimentary copy of Pane and Suffering from NetGalley (and the publisher) in exchange for an honest review.

I am currently reading Murder, Plainly Read by Isabella Alan.   I am off to watch Sleepy Hollow, Scandal, and How to Get Away with Murder!  Have a nice, relaxing evening and Happy Reading!