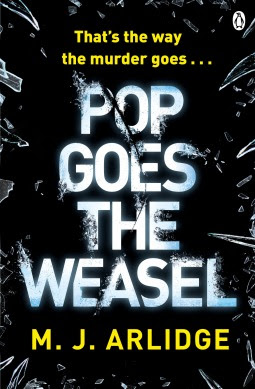 It is Take Your Teddy Bear to Work Day!  What a fun day. Though I think if most people take a teddy bear into work, they will, unfortunately, get laughed at (such a shame).  My mother and I own quite a few teddy bears.  We collect Boyd's Bears.  I miss all their beautiful creations. Some of the bears are three feet tall and occupy their own chairs (they also get Santa hats at Christmas).  I may be an adult, but I love my stuffed toys (they give a house warmth and whimsy).  What about you?  Do you have a teddy bear or collect something special?

Pop Goes the Weasel by M.J. Arlidge is the second book in A Detective Helen Grace Thriller series.  Detective Inspector Helen Grace has returned to her job at the Southampton Central Police Station as a leader of a Major Incident Team.  She has kept herself busy (with work) since she killed her sister Marianne (serial killer in last book).  DC Charlie Brooks will be returning to work in the next few days.  She has not worked since she was held hostage by Marianne.  Charlie lost the baby she was carrying.  Instead of going to another department or station, Charlie is returning to the team.  They also have a new boss, Detective Superintendent Ceri Harwood.  Harwood is very different from Michael Whittaker (former boss and Grace’s mentor).  Harwood is the type to let others do the work and then she takes the glory for promotions.  Harwood also believes in working with the press.  She has decided to work with Emilia Garanita, a reporter with the Southampton Evening News (a royal pain in Helen Grace’s behind).

There is a new killer in town.  The killer is sadistic and takes an organ from the victim.  The perp then delivers the organ to family (or co-workers).  Will the team be able to catch the killer?  Pop Goes the Weasel will keep engrossed until the very last word.  It has great characters and a juicy mystery.  I was a little disappointed at how easy it was to figure out the killer.  Pop Goes the Weasel is superbly written, and I was interested to find out what happened to the characters after the death of Marianne.  The book does contain explicit violence and sadomasochism (fair warning).  I give Pop Goes the Weasel 5 out of 5 stars.  In order to understand Pop Goes the Weasel, you do need to read the first book in the series Eeny Meeny (which you will enjoy).  I cannot wait for the next book from M. J. Arlidge which is The Doll's House.  The Doll's House  (which will be book three) will be out February 2, 2016.  Liar Liar will be the fourth book in the series and it will be released in June 2016 (according to Amazon).

I received a complimentary copy of Pop Goes the Weasel from NetGalley in exchange for an honest review.

Thank you for stopping by and reading my review.  I hope everyone has a lovely and relaxing Sunday.  I am off to wrap presents for my father's birthday.  He was born on Columbus Day in 1937.  Take care and Happy Reading!

Posted by Kris Anderson, The Avid Reader at 2:32 PM