Ghost of a Potion 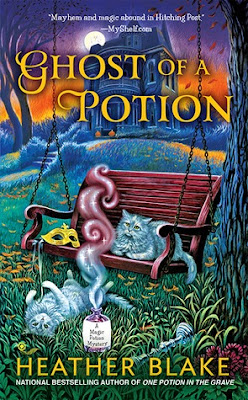 It is American Tough Tag Day!  They do not know why the  word American was added to it, but I am sure everyone has played tag as a child.  Someone is it and you have to find the other players.  It was not one of my favorite games.  I did not mind the hiding part because then I could hide out and read!  The week has gone by so quickly.  Time seems to go faster as I get older.

Ghost of a Potion by Heather Blake is the third book in A Magic Potion Mystery series.  Carly Bell Hartwell is getting ready for her yearly hibernation (starts at midnight on Halloween and ends at 11:49 p.m. on All Souls Day).  Halloween starts the next day and Carly stays inside her home to avoid ghosts (the ones that have not passed over).  Carly had experienced a bad ghost seven years previously and has not been able to deal with them since then.  That evening Carly is attending an event at the Ezekiel Mansion (they will own the house if the lost heir does not claim it by January 1).  It was just restored by the Harpies—The Hitching Post Restoration and Preservation Society (what did you think I meant).  Carly’s mother is trying to get her husband into the society (to keep him busy and out of her hair).  Carly will be attending with her on-again-off again (currently on) boyfriend, Dylan Jackson (who is also an officer with the Hitching Post Police Department).

The evening does not start out well.  Patricia Davis Jackson, Dylan’s mother, does not like Carly and hits Carly with a few zingers as a greeting (and tries to ruin her beautiful dress).  A little while later they hear screaming.  Patricia is standing over Haywood Dodd with a candlestick in her hand.  Haywood is dead.  Haywood was going to make a big announcement at 10 p.m. and he would not give anyone a hint.  Patricia, of course, is the main suspect which means Dylan is not allowed to investigate the case.  As for Carly, she saw the one thing she wanted to avoid—a ghost!  Haywood Dodd’s ghost noticed Carly and followed her home (she ran the whole way).  Carly has no choice but to help Haywood.  Carly sets out to solve the murder with help from Dylan (and friends).  It looks like Carly is not going to get to hibernate this year.  She might even pick up a few more ghosts along the way that she will have to assist (much to her Cousin Delia’s delight).

The other two books in A Magic Potion Mystery series are A Potion to Die For and One Potion in the Grave.  For more information on Heather Blake and her books, check out her website HeatherBlakebooks.com.

I received a complimentary copy of Ghost of a Potion from the author (I won a copy on Facebook) in exchange for an honest review.

I am currently reading The Fruitcake Murders by Ace Collins.  I am off to get dinner and do a few more chores.  Then it is a busy television night (I do not read all the time).  Bones, Scandal, The Originals, How to Get Away with Murder, Project Runway, Haven (the final season) and Sleepy Hollow are on tonight!  How come some nights have nothing on and other nights there are too many shows?  Have a great evening and Happy Reading!