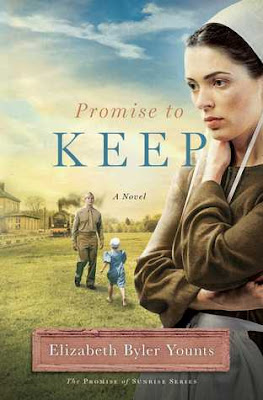 Happy Monday!  Today is Evaluate Your Life Day!  This is a day to reflect.  In my case, I think I will skip the evaluation and reflection (I do not want to depress myself) and read a good book instead!  I woke up to find crime scene tape on the edge of my property.  I am really hoping that the neighbor is just decorating for Halloween.

Promise to Keep by Elizabeth Byler Younts is the third book in The Promise of Sunrise series.  Esther Detweiler’s grandmother just passed away.  She has been Esther’s rock her entire life.  Esther is left with a farm to run and a little girl to raise.  Esther has been taking care of Daisy Garrison for the last four years.  Daisy’s mother passed away (she was Amish before she left to marry) and her father, Joe is off fighting the war (Joe is Englisch).  Daisy’s mother made Joe and Esther promise that Esther would take care of Daisy.  They have heard very little from Joe the last four years and have seen even less money.  On the day of the funeral, Esther father shows up.  Esther thought he was dead (that is what she was told).  Where has he been for the last thirty years?  Will Esther be able to forgive her father for his absence and lies?

Then Joe arrives back in town.  He is suffering from PTSD, but he is looking forward to seeing his daughter. Daisy is not looking forward to seeing him.  Daisy is deaf and Esther taught her a form of ASL (using a book and some made up signs).  Most people believe Daisy is dumb and should be institutionalized (very ignorant people).   Joe will have to get to know Daisy slowly so she can learn to trust him and get to know him.  Esther, Joe, and Daisy will be spending a lot of time together.  Love can bloom in the unlikeliest of places, but will the love be given a chance to grow.  Esther and Joe are going to have to make choices.  Will they make the right ones?

I received a complimentary copy of Promise to Keep from NetGalley in exchange for an honest review.

I am currently reading The Amish Heart of Ice Mountain by Kelly Long. What are you reading?  I am always looking for new books to read! Have a wonderful Monday and Happy Reading!


Posted by Kris Anderson, The Avid Reader at 2:43 PM