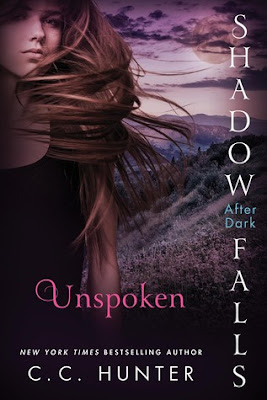 I have hit 500 reviews on Amazon!  I started reviewing and blogging about books one year ago!  Time goes by quickly when you are doing something that you enjoy!  Some great new books came out today.  Here are just a few: Flipped for Murder by Maddie Day, Look Both Ways by Carol J. Perry, Haunt Couture and Ghosts Galore by Rose Pressey, The Scottie Barked at Midnight by Kaitlyn Dunnett, When Secrets Strike by Marta Perry, and The Single Undead Moms Club by Molly Harper.

Unspoken by C.C. Hunter is the third novel in the Shadow Falls:  After Dark series.  Della Tsang is vampire and attends Shadow Falls Academy (school for supernaturals).  In fact she is a Reborn (turned twice) and is now bonded to the infuriating and handsome Chase Tallman.  Della, though, has a lot going on in her life (besides adjusting to being a vampire).  Her father is accused of murdering his sister, Bao Yu (who is now a ghost and following Della).  His blood was found on the knife that killed her (his twin brother faked his death when he became a vampire).  Della is determined to clear her father’s name.  At the same time her elderly neighbors the Chi’s were murdered in their jewelry store.  Mrs. Chi’s ghost has come to Della for help (Della is a ghost magnet).  Della believes she saw who killed the Chi’s.  Since Della is unable to work on her father’s case (though she keeps trying), she works on solving the Chi’s murder.  She will have her work cut out for her especially when the police get an anonymous tip that leads to Della.

Chase works on getting back into Della’s good graces (she keeps pushing him away despite her attraction to him).  Chase quits his job with the Vampire Council and joins the FRU (Fallen Research Unit which is like the FBI).  Della wants to become an agent and join the FRU when she graduates from high school.  Burnett James (part owner of Shadow Falls—the school—as well as being a part of the FRU) is reluctant to accept Chase because he wants to protect Della (he is like a father to Della).   Della wants to know that being with Chase is her choice and not because of the bond they share.   Della also has not told her parents that she is a vampire.  She is trying to hide it, but her father is treating her differently.  Could her father, Chao Tsang, have figured out what Della has become?

There is a lot going on in Unspoken.  It is an interesting book (and told from Chase’s and Della’s point of view) but it was difficult to read with the foul language, teenage angst, and Della’s constantly being angry.  The book also includes teenage intimacy.  It was difficult to get into this book, but it gets more interesting in the second half of the novel.  I believe in order to understand everything that is happening in Unspoken, you need to read the first two books in the trilogy.  I give Unspoken 3 out of 5 stars.  It was an okay novel, but I did not really enjoy this book (I actually found it very frustrating).  A love triangle for teenagers seems a little hard to believe as well as teenagers doing adults work (but then they still act like teenagers with temper tantrums, crying, and disobedience).  I think the novel would have been better with adults instead of teenagers (and the teenage angst).  I love vampire, witches, and other supernatural novels, but Unspoken just did not speak to me.

The other two books in the series are Reborn and Eternal. I received a complimentary copy of Unspoken from NetGalley (and the publisher) in exchange for an honest review.

Did you purchase any books today?  Book release day is my favorite day! There are some great books coming out next week on November 3, 2015.  I will provide more details later.  Have a lovely, Tuesday evening and Happy Reading!

Posted by Kris Anderson, The Avid Reader at 6:52 PM