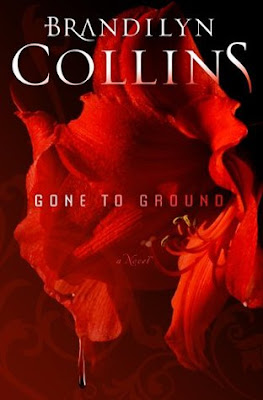 Today is also known as Moldy Cheese Day!  Personally, that is just gross.  But to each his own!  I saw on the news that we are supposed to get a cold front this weekend!  It means we will have weather in the low 80's.  Not quite my idea of a cold front.


I just finished reading Gone to Ground by Brandilyn Collins.  It is told in the first person perspective from the three main characters.  There have been five murders in the last three years in Amaryllis, Mississippi.  Each person was killed in the exact same manner and then stuffed into a closet.  The Amaryllis Police Department has been unable to solve the crime and catch the Closet Killer (as he has been dubbed). Then there is a sixth victim.  Three different women believe they know who the Closet Killer is.  Tully Phillips is nineteen years old, married, and expecting her first baby.  Her husband, Mike came home late the night of the sixth killing and he had bloody hands.  Deena Ruckland is thirty-two and owns Deena’s Cut ‘n’ Style.  Her brother, Steve showed up at her house the night of the killing with blood on his uniform.  Steve is mentally challenged and has been picked on his whole life.  He refused to answer his sister’s questions.  Cherrie Mae Devine is a house cleaner.  One of her clients is Mayor Austin Bradmeyer and his wife, Eva.  Cherrie Mae was cleaning his office and looked in one of the Mayor’s desk drawers.  She noticed a file that was marked “Closet Killer”.  The file contains photos of each victim and the ring of the last victim is in the drawer.

These three ladies will come together to unravel the clues and solve the killings.  Who is the Closet Killer?  I found Gone to Ground to be a difficult novel to read.  The women talk with a Southern accent which was hard to read.  I did not enjoy the first person perspective.  If it had been told from one person’s point-of-view, it would have been okay.  However, it kept switching between the women making the reader guess which lady is it now.  I did like that this was a Christian mystery (no foul language or sex).  The mystery was very easy to solve (I was hoping it would be more difficult).  The writing is good, but I felt the book needed a little reworking (editing).  I give Gone to Ground 3.75 out of 5 stars.

I received a complimentary copy of Gone to Ground from the author (and Book Club Network Inc.) in exchange for an honest review.

Thank you so much for stopping by.  I hope you have a nice, relaxing evening and a great weekend.  Happy Reading!