Miriam and the Stranger 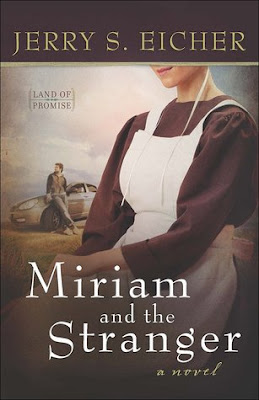 It is National Golf Day!  My father played golf when I was younger.  Of course, I found the clubs more useful for other purposes (as a child you can find many clever uses for golf clubs).


Miriam and the Stranger by Jerry Eicher is the third book in the Land of Promise series.  Miriam Yoder is twenty-four years old and living in Clarita, Oklahoma.  Clarita is a very small Amish community in Oklahoma.  Miriam has been teaching for the last three years while living with her Uncle William and Aunt Frannie.  Miriam receives a letter from her mother stating a surprise will be coming her way.  Miriam has no idea what the surprise could be, but she has an idea.

Tyler Johnson is freelance journalist who took an assignment to write on how the local Amish community has recovered from the tornadoes a few years ago.  One of the farms Tyler visits is the Beiler’s.  William welcomes him to the greenhouse and invites him to dinner.  Miriam is instantly taken with him (gets tongue tied and flustered) and Tyler with her.  Miriam, knows though, that it cannot be.

Miriam surprise is Minister Mose Stoll from Possum Valley, Ohio.  He is a widower looking for a new wife.  Miriam’s future brother-in-law mentioned her to Mose.  Mose then asked several people about Miriam including her father, the deacon, and the bishop.  Mose has come to Clarita to see Miriam in person (to interview her).  After talking with Miriam (and just about everyone else in the small community), Mose decides she is the right person for him and asks to correspond with her (to get to know her better).  Miriam is not really not given a choice in the matter and agrees.  She knows that marrying Mose is what her family wants for her.  Her heart, though, does not agree especially as she encounters Tyler more and more in the community.   Does Miriam follow her heart or her head?  What will be the right choice for her?

I was a little disappointed in this last book in the Land of Promise series.  Can you imagine having no choice in who you marry?  I felt that Miriam should have spoken up (but then there would not have been a story).  I have just told you a little of what goes on in the book.  There is also Tyler’s investigation.  His research uncovers some startling information.  It was nice to revisit Clarita and the characters we have come to know in the series.  It is a nicely written book with a good flow.  Miriam and the Stranger has a lovely and enjoyable ending. I give Miriam and the Stranger 3.75 out of 5 stars (I liked it, but did not love it).  The other two books in the series are A Blessing for Miriam and Miriam's Secret.

I received a complimentary copy of Miriam and the Stranger from NetGalley (and the publisher) in exchange for an honest review.

I am currently reading Streams of Mercy by Lauraine Snelling (I love her books).  Have a nice, lovely Sunday afternoon.  Happy Reading!