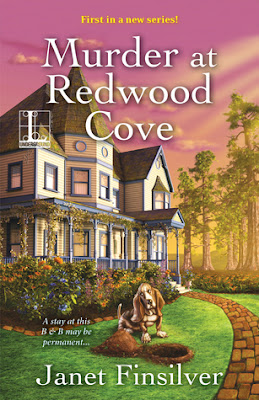 It is International Skeptics Day!  Do you doubt the existence of ghosts, aliens, or vampires?  This is the day for you!  Today I had a doctor's appointment.  Every two months I have to visit my neurologist in Tampa (about an hour and a half away) to get my pain medication.  I stopped at the biggest Wal-mart around to get some tees for fall (it will get cool eventually).  They had no plain, short sleeve t-shirts.  If I wanted Mickey Mouse, Superman, Teenage Mutant Ninja Turtles, I was set!  I just wanted some nice, comfy 100% cotton tees with short sleeves.  I live in Florida (they had turtle necks, long sleeve tees, insulated shirts, and sweaters)!  I am taking my quest online!

Murder at Redwood Cove by Janet Finsilver is the first book in a new cozy mystery series.  Kelly Jackson is an Executive Administrator for Resorts International.  Her first single assignment is the Redwood Cove Bed and Breakfast.  The manager, Bob Phillips died in an accident and Kelly has been sent to take over as interim manager.  Redwood Cove, California is a beautiful location with a lovely town.  Shortly after arriving Kelly meets the Silver Sentinels.  A group of senior citizens from the town who solve crimes.  Bob Phillips was a member.  The Silver Sentinels do not believe that Bob’s death is an accident, but they are unable to convince Deputy Sheriff Bill Stanton.  After Bob’s office is ransacked, Kelly discovers an envelope in the safe.  Bob had written in the information in code but there was a note asking that the contents be given to the Silver Sentinels.  The group is thrilled to have something to investigate.  Kelly decides to help the group and starts asking questions around town.  Kelly is hoping to find out Bob’s movements the day he died from his phone.  The phone is returned to Kelly’s office and stolen before she can look at it.  Someone has something to hide.  Will Kelly and the Silver Sentinels be able to figure out who wanted Bob dead and why?

I enjoyed reading Murder at Redwood Cove.  It is a good first book in a series.  I liked the setting of Redwood Cove and the Silver Sentinels (a fun group).  I think Kelly will be a good main character, but she needs a little more development.  We are given just a few details on Kelly’s life prior to coming to Redwood Cove (I found out more about Fred the basset hound than I did about Kelly).  The mystery was complex (just how I like them) and not easy to solve (though I did).  I give Murder at Redwood Cove 4 out of 5 stars.  I will definitely be reading the next book in this series which is Murder at the Mansion.  Murder at the Mansion will be out June 7, 2016 (according to Amazon).

I received a complimentary copy of Murder at Redwood Cove from NetGalley in exchange for an honest review.


Thank you so much for stopping by and checking out my latest review.  I have so many to write and post!  I have gotten a little behind schedule.  I am currently reading A Respectable Actress by Dorothy Love.  Have a lovely evening and Happy Reading!