The Skeleton Haunts a House 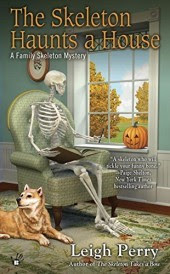 It is Come and Take It Day as well as Mad Hatter Day!  I have so many wonderful new books to read. I cannot wait until I have some free time. Did you get some new books today?


The Skeleton Haunts a House by Leigh Perry is the third book in A Family Skeleton Mystery series.  Dr. Georgia Thackery is dressing up as Thelma for Halloween Howl at McQuaid University in Pennycross, Massachusetts.  Sid wishes to go as Scooby Doo this year (he wanted to do something different this year).  Who is Sid?  It is their skeleton person (not sure how else to describe him).  He is a skeleton with a great personality.  Sid came to life about twenty years ago at Fenton’s Family Festival when Georgia was a little girl and needed help.  Sid has been with the family ever since.  Everyone accepts him except Deborah.  Deborah is Georgia’s sister and she tends to ignore happy go lucky Sid.  Halloween is the one time of the year that Sid can go out in public without too many issues (and he is so excited).

An old building on campus has been turned into McHades Hall.  Deborah (the sister) is in charge of the event and Madison, Georgia’s daughter, is working the event.  Madison reserved special tickets for Sid and Georgia (she did not know that Georgia does not do haunted houses).  Unfortunately, a dead body is discovered while Sid is inside and the place is locked down.  Sid quickly ditches the Scooby Doo outfit and blends in (thankfully there are “fake” skeletons in the haunted house).  Deborah actually asks Georgia and Sid to investigate the case (the whole family is shocked).  They will have an inside track thanks to Sid being stuck in the McHades Hall (he can eavesdrop) while the police did the initial investigation.  Sid works his fingers to the bone on this case using his crackerjack computer skills to look into the victim, Kendall Fitzroy.

Georgia’s parents, Dr. and Dr. Thackery are back home from their sabbatical.  Georgia’s mother has a grad student with a crisis (they are both English professors at McQuaid University).  There is also the possibility of a little romance as Georgia meets and spends time with the new adjunct professor Dr. Brownlow Mannix.  Sid is also very busy.  When he is not sleuthing (he is Sherlock Bones to Georgia’s Dr. Watson), he is taking an online art history class (he has a lot of time on his hands since he does not sleep).

I received a complimentary copy of The Skeleton Haunts a House from NetGalley (and the publisher) in exchange for an honest review.  For more information on Sid and Leigh Perry, check out her website.

Tonight The Flash returns to television!  Agents of Shield and Limitless are also on.  Can you tell that I like supernatural or paranormal shows and books?  Have a nice, relaxing evening and Happy Reading!