Among the Ten Thousand Things 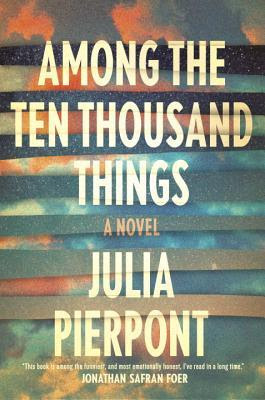 It is finally the day for the season premiere of Masters of Sex!  I discovered this show last year before the season began, and I just love it.  This year they are taking a leap into the future (five years).  If you have Showtime On Demand, you can watch the season premiere right now! Now, on to my review!

Among the Ten Thousand Things by Julia Pierpont was a long and excruciating novel to read!  Jack Shanley is an artist (installation artist) who is married to Deborah.  They have two children named Simon (a moody teenager) and Kay who is eleven.  Kay comes home one day and the doorman gives her a package for her mother.  The package is not sealed.  Kay opens it up and reads the enclosed letter.  The letter is from Jack’s mistress, Jordan Esberg.  Along with a letter are printouts of every text or chat they ever had (and they are quite explicit).  Kay reads the letter and some of the printouts.  She does not know what to do with the box.  Kay ends up showing it to her brother, Simon who immediately calls in their mother.  Turns out that Deborah knew about the affair since Christmas.  Jack was supposed to call it off (which he eventually did), but he turned Jordan into a bitter and vengeful woman.

Deborah cannot believe that her children now know about the affair (the latest one).  The children are angry and do not want to see or talk to their father.  The father is a little bit ashamed (that his kids know about it), but he expects Deborah to make everything better.  Jack thinks it will be a rough few days (maybe a week) and then life will return to normal.  Jack throws himself into his latest project.  He installs a concrete house with furniture, windows, etc. and then lets off explosives.  It is called BAYT (which means house).  It could be a house in any country.  Unfortunately, Jack did not make sure all the explosives were discharged.  On the night of the opening there is a kaboom!  That is the end of that display and Jack’s career for a while.  Deborah takes the kids to their ramshackle cottage in Rhode Island for two weeks so they can get away.

Among the Ten Thousand Things is what happens to a family after the affair is exposed.  It is written as if someone set down and typed out their story (just rambles on) and it was published without any editing.  I found the story boring, bland, and dismal.  I really had to work hard to get through this novel.  The book abruptly switches between people and scenes (so abrupt that it leaves the reader confused at first). The description really sounded good too (of course, that is the goal of descriptions).  The book is also written in an unusual order.  You find out what happens to everyone in the middle of the book.  Then story goes back and tells about the two weeks at the cottage in Rhode Island (like putting the cart before the horse).   The ending felt very incomplete (but I was just so happy that I had finished it). I give Among the Ten Thousand Things just 1 out of 5 stars (I dislike giving bad ratings, but it goes with the territory).  This book was definitely not for me.

I received a complimentary copy of Among the Ten Thousand Things from NetGalley and First to Read in exchange for an honest review.  The review and opinions expressed are my own.

I am off to cook dinner (using the grill again).  Have a great Sunday and Happy Reading!

Posted by Kris Anderson, The Avid Reader at 6:43 PM