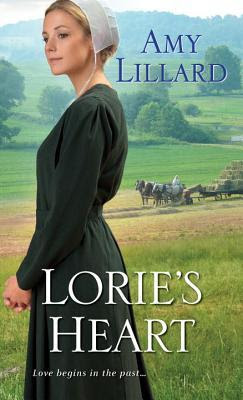 My yard is a giant mud puddle (well, since we have sand and not dirt, I guess it is a sand puddle)!  There has just been too much rain. It is impossible to keep the floor clean near the back door (we rarely use the front door).  We have not had this much rain in over ten years.  It is normal to have an afternoon shower (usually around 3 p.m.) every day during the summer, but not this constant rain. I see some sunshine, and I am hoping it will last for a little while. I wanted to share a review of a lovely Amish novel today.

I just finished reading Lorie’s Heart by Amy Lillard.  It is the third book in the Wells Landing Romance series.  Lorie Kauffman’s father, Henry just passed away.  Lorie was very close to her father and is having a hard time dealing with his death especially after she notices a notice on his chest (when she goes to identify the body with her step-mother).  Lorie’s step-mother, Maddie, is less than cooperative.  Then Lorie goes through a box of belongings given to them by the police.  In it is a wallet with a driver’s license.  Lorie is even more confused when the license has her father’s picture on it but the name Henry Mathis.  Lorie is even more determined to find out more about her father and his secrets.

Lorie convinces Luke Lambright (a young man who left the Amish to become a race car driver) to take her to the address on her father’s license.  It leads them to Sundale Retirement and Assisted Living Center.  There Lorie finds a grandmother she never knew about.  Betty Mathis is in the early stages of dementia and Alzheimer’s.  Lorie also meets Zachary Wayne Calhoun.  Zach works part-time at the center while he was finishing college (he just graduated).  Zach is instantly attracted to Lorie and wants to get to know her better.  Lorie starts coming to the center regularly to get to know Betty and, hopefully, find out more about her father.  Lorie’s stepmother forces Lorie to start taking baptism classes in order to join the Amish church.  Lorie is not sure she wants to join.  She would have to give up her painting (which she has been doing in secret for many years) and marry Jonah Miller (a man she has been seeing since she was eighteen).  Will Lorie find the answers she seeks?  Will she decide to join the Amish church or jump the fence?

You will have to read Lorie’s Heart to find out!  Lorie’s Heart is a lovely book and I thoroughly enjoyed reading it.  It may be the third book in the series, but it can easily be read by itself.  I give Lorie’s Heart 5 out of 5 stars.  It is a book that can be read in an afternoon (especially if it is raining).  It is well-written and engaging. Lorie's Heart will be out on Tuesday, July 28, 2015.  The next book in the series will be Just Plain Sadie (about Lorie's step-sister).  Just Plain Sadie will be out on March 29, 2016.  The first two books in the series are Caroline's Secret and Courting Emily (both books are currently $1.99 on Amazon).

I received a complimentary copy of Lorie’s Heart from NetGalley in exchange for an honest review.  The review and opinions expressed are my own.

Thank you for visiting and reading my latest review.  I am currently reading A Deceptive Homecoming by Anna Loan-Wilsey. Have a great afternoon and Happy Reading!

Posted by Kris Anderson, The Avid Reader at 3:07 PM