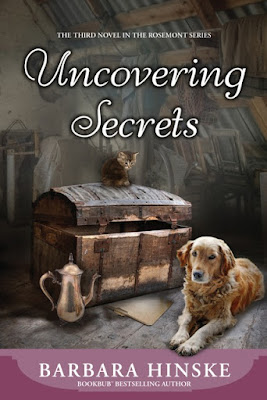 Isn't the cover just adorable?  I love the cute little kitten sitting on top of the trunk. After reading the book, you will understand all the details in the picture.

I just finished reading Uncovering Secrets by Barbara Hinske.  It is the third book in the Rosemont series (Coming to Rosemont and Weaving the Strands are the first two books in the series).  Maggie Martin is happily living in Rosemont where she moved after the death of her husband, Paul.  Maggie is also the new mayor Westbury (she was a write-in candidate) and newly engaged to John Allen, the town veterinarian.  Susan, Maggie’s daughter, is very excited about the wedding and begins the planning stage immediately (thanks to Pinterest).   Maggie is working hard to help the town find out who embezzled from the town’s general fund the worker’s pension plan.  Since William Wheeler, former mayor and main suspect, has killed himself leaving them without his testimony.  Special Counsel Alex Scanlon is now having to get subpoenas for the international banks and force them to comply.  They then have to wade through the boxes of documents to find the information they are seeking.

Frank Haynes is ensuring that his name does not appear on any of the documents (it is helpful to have money that helps ensure success).  He is sorry he got involved with Chuck Delgado (who is reputed to have mob connections).  Frank is a contradiction in this book.  Frank decides to help young David Wheeler (father is William Wheeler who died committed suicide in jail after being arrested).  David has a dog named Dodger who is good at the agility training course.  Frank helps sponsor David and Dodger in a local contest.  Then he pays for classes for David and Dodger on agility training.  When Dodger gets injured, Frank also pays the vet bills.  Frank brought in Loretta Nash as his secretary.  Loretta was Paul Martin’s mistress (one of three children may also be Paul’s).  Frank is hoping to get useful information from Loretta.  Unfortunately, Loretta’s daughter, Nicole has been very sick.  After many tests they discover she has a kidney disease.  Loretta expects to be fired since she has been away from the office so much, but she is pleasantly surprised (I was shocked as well).  Turns out that Loretta has some information that could really help Maggie get Frank and Delgado.  However, Maggie makes a big mistake when Loretta comes to give her the evidence (Loretta did not know that Maggie found out about her affair with Paul).

Frank also uncovers some information (actually he stole the information) that may help him get the house of his dreams, Rosemont.  Maggie is unaware of what Frank is up to as she prepares to get married.  The whole town has been invited to Rosemont to see her wed John (despite Maggie’s and John’s protests for a small wedding).  Let us hope for a beautiful day for the wedding! Maggie’s granddaughters have taken a liking to Marissa Nash.  Maggie did not tell her children about their father’s affair, but something tells me they are going to find out.  Maggie has her hands full with the wedding, the fraud investigation, and now some little kittens.  John’s dog, Roman found some kittens without their mother out in the cold.  Maggie agreed to take care of them (along with some help from David Wheeler and others).  You know that all six kittens are not going to be adopted and some of them will be staying at Rosemont (which will make Roman happy).  Maggie’s dog, Eve is not so happy!  Maggie is finally doing something with all the silver she discovered in the attic (when she was locked in one day).  Some of the silver is quite rare and could be worth a lot of money.  An insurance appraiser is coming to check out Maggie’s sterling silver (Frank will be very jealous when he finds out).

I enjoyed reading Uncovering Secrets.  I give Uncovering Secrets 4 out of 5 stars.  I just had two little issues.  One is that the story lines are not finished in this book.  They continue on and we have to wait until the next book.  My second issue is that you really have to have read the first two books in the series to understand Uncovering Secrets (most series you can read the books out of order without a problem).  Otherwise a very gratifying reading experience.  I liked the town, the characters (both the good ones and the bad ones), and the mystery.  I cannot wait to find out what happens next!  Uncovering Secrets is currently available for $.99 (for a limited time) and is a part of Kindle Unlimited (if you are a member or wish to try it out).

I received a complimentary copy of Uncovering Secrets from the author in exchange for an honest review.  The review and opinions expressed are my own.

I am off to feed the cats and dogs their dinner and then I have a new grill to put together (I miss the old days when items came fully put together).  Of course, in the old days I would have had to go to a store and purchase it instead of ordering it online and having it delivered to my home!  Have a great evening and Happy Reading!