The Watchmaker of Filigree Street 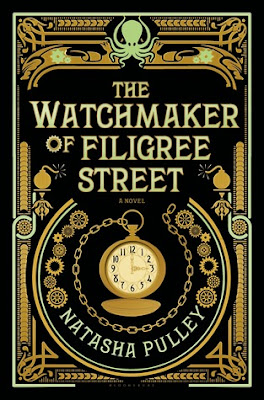 It is another rainy day today here in my area.  The mosquitoes are terrible today!  I am staying indoors (not a hardship).  I am currently watching The Librarian and the Judas Chalice (while Doozy tries to con me out of bones).  I get a kick out of watching Stana Katic (Kate Beckett from Castle) playing a French vampire (makes me laugh).  I think it has something to do with the accent.

The Watchmaker on Filigree Street by Natasha Pulley is a Victorian steampunk mystery novel.  Nathaniel “Thaniel” Steepleton is a telegraph operator at Whitehall (government).  He has held the position for the last four years.  Thaniel prefers playing the piano, but it did not pay enough to support himself and his widowed sister, Annabel (who lives in Edinburgh with her two sons).  The government have been receiving threats of bombs from Clan na Gael.  Everyone is on alert and preparing for the worst.

One night Thaniel arrives home to his room at the boarding house to find the door open, the dishes done and put away (not by the landlady).  Thaniel then spies a gift box with his name on it.  Inside is a beautiful pocket watch.  It does not open and he cannot hear it working.  Two months later it starts working and saves Thaniel.  A loud noise comes from the watch making him go outside and saves him from a bomb.  Thaniel goes looking for the creator of the watch.

Grace Carrow is at the end of her fourth and final year at Oxford.  She has a beautiful watch with filigree that looks like swallows flying.  Grace inherited a house from her aunt, but she cannot have it unless she marries (it is being held in trust by her father).  Grace loves science.  She wants to do research and to teach.  Her mother, Lady Carrow is determined Grace will marry and make a good match.  Grace has money, a house, and needs a husband who will allow her experiments.  Thaniel and Grace are destined to meet for good or for bad?

Keita Moiri makes items out of clockworks.  He made the watch for Thaniel and Grace.  He has many beautiful items in his shop.  There is also a clockwork octopus named Katsu.  Katsu likes to live in a dresser drawer and steal socks.  Keita has a special talent.  Thaniel is not sure what to make of Keita when he first meets him.  He thinks Keita might be behind the bombings (the maker of the bombs).  Thaniel is tasked with keeping an eye on Keita and to get evidence.  Keita has a room to rent and Thaniel moves in (Katsu really likes Thaniel’s dresser).  Thaniel really gets to know Keita and finds out about his talent (and innocence).  Thaniel now has to save Keita from the police (who are determined to pin the bombings on him) and find the real culprit.

The Watchmaker of Filigree Street is a complicated novel.  I have only given you a small snippet of what happens in the novel.  It is an interesting book, but there are too many ideas shoved into one story (hard to keep track of all the characters and everything that is going on).  There are also a lot of technical, scientific terms and explanations that will give you a headache.  The book gets better towards the end (if you get that far) and the identity of the bomb maker is easily figured out.  What Grace does, though, is definitely a shock and unexpected (sorry, spoiler)!  I give The Watchmaker of Filigree Street 3.5 out of 5 stars.

I received a complimentary copy of The Watchmaker of Filigree Street from NetGalley in exchange for an honest review.  The review and opinions expressed are my own.

I am currently reading Rich Friends by Jacqueline Bisset (it is just horrible).  It is evidently a novel that is being re-released (which I did not know when I picked it).  I will post a full review soon. Have a relaxing afternoon and Happy Reading!

Posted by Kris Anderson, The Avid Reader at 5:50 PM