Mrs. Hudson and the Spirits' Curse 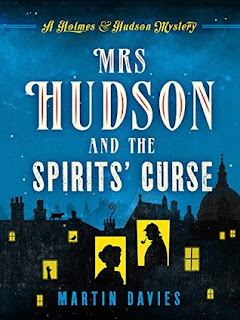 It's Hump Day!  I do not know if any of you have ever noticed, but if you click a link for a book on my site it will take you to AmazonSmile!  AmazonSmile is just like Amazon except for every purchase they make a donation to the charity you designate (I have A.S.P.C.A.--my local chapter).  If you get a chance, you should check it out!

I just finished reading Mrs.Hudson and the Spirits’ Curse by Martin Davies.  Mrs. Hudson is looking for a new employer (her last one committed suicide).  Mrs. Hudson has an excellent reputation (as well as helping several wealthy people out of pickles) and can have her choice of housekeeping positions.  However, she is looking to spice things up and wants to work for Mr. Sherlock Holmes and Dr. Watson.  They have taken rooms on Baker Street.  Mrs. Hudson thinks this position will be just the one for her and Flotsam (Flottie for short).  Flottie was brought to Mrs. Hudson two years earlier in need of assistance.  Mrs. Hudson took her in and gave her a position.  She is making sure Flottie gets an education.

Mrs. Hudson is given the position and they move to their new accommodations immediately.  Despite the boxes with unusual contents, the two settle in quite nicely with their new employers.  Then one night just after 8 p.m. and unusual (and supposedly mysterious) man arrives with a letter and a dagger for Mr. Holmes.  The letter is from Nathaniel Moran who wishes to meet with Holmes and Watson.  Mr. Moran has just returned from Sumatra Islands where he and some friends established a business (Sumatra and Nassau Trading Company).  They were not welcomed by the natives and were threatened.  They were told they had offended the spirits and had to leave.  After several deaths (including one of their own) the men fled the island.  Mr. Moran had to wait to travel (in other words, the others left him behind) because he was ill (and just arrived in England).  Mr. Moran claims the threat has followed him home, and he is afraid for his life (as well as his colleagues).  While Sherlock and Dr. Watson start their inquiries, Mrs. Hudson (along with Flotsam) make some of their own.  Who is threatening Mr. Moran and his business associates?  Why did the curse follow them home?  Will more people die before the mystery can be solved?

Mrs. Hudson and the Spirits’Curse did not meet my expectations.  The book makes Mrs. Hudson out to the mastermind behind Sherlock Holmes.  The Sherlock makes wrong assumptions (scientific based) but wrong.  Mrs. Hudson uses her common sense as well as intellect and network of friends to solve crimes.  Dr. Watson’s role was reduced to errand boy (for the most part).  There are many scientific terms (as well as what my father calls $10 words) used and long-winded speeches (deductions that were incorrect).  The book is a cute idea, but the writer was not able to pull it off.  The novel is told from Flotsam’s perspective (I would rather have had it from Mrs. Hudson’s point-of-view).  This is a British novel so some of the word spellings and terms are different from those that we use in America.  The mystery was very simple and a cinch to figure out.  Therefore, I give Mrs. Hudson and the Spirits’ Curse 3 out of 5 stars.

I received a complimentary copy of Mrs. Hudson and the Spirits’ Curse from NetGalley in exchange for an honest review. The review and opinions expressed are my own.

I wanted to let you know about a giveaway on Goodreads for Berried Secrets by Peg Cochran.  Berried Secrets (click on title of book--in red--to go to giveaway) will be out August 4, 2015 and is the first book in her new series. I really appreciate all of you reading my reviews and thoughts! Have a stupendous day and Happy Reading!

Posted by Kris Anderson, The Avid Reader at 1:35 PM