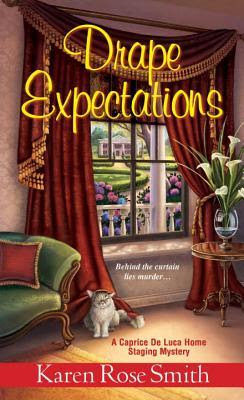 Happy Book Release Day!  I love waking up and finding new books on my Kindle (such a wonderful invention).  I also woke up to a little sunshine after it poured all night (like we needed more rain).  One of our hibiscus trees is actually leaning over and coming out of the ground from all the rain (home ownership is not for the weak).  What is it like in your area?

I just finished reading Drape Expectations by Karen Rose Smith.  It is the fourth book in the Caprice De Luca series.  Ace Richland has asked Caprice to do him a favor and stage the home of his girlfriend, Alanna Goodwin.  Ace and Alanna are going to move in together.  Caprice agrees because Ace is a friend (though she knows Alanna is going to be very difficult).  Alanna’s house is very southern and stuffed to the gills.  She objects to every change Caprice wants to make to the house.  During the open house, Caprice notices that Alanna is off having a discussion with Len Lowery, the keyboard player in Ace’s band.  What are those two discussing?  It is the second time Caprice has seen them together.

Ace is getting ready to go out on tour, but he is having to replace one of the band members who just quit.  Then two of Ace’s best guitars are stolen from his mansion (the locked room).  Only someone close to Ace could have gotten into that room and stolen the guitars.  Then some original songs are also stolen.  It seems like someone is trying to sabotage Ace’s tour.  When Caprice goes over to Alanna’s one day, no one answers the door.  Since the door is open, Caprice (of course) goes in.  She finds Alanna dead.  Since, unfortunately, Ace is a prime suspect, Caprice has to investigate to clear his name.

Caprice looks into who stood to inherit Alanna’s vast estate.  Alanna’s will divided her estate into three parts.  One third went to Alanna’s sister, Twyla Horton.  One third goes to charity.  The last third of the estate goes to Archer Ford.  Archer claims to be the illegitimate son of Alanna’s first husband, Barton.  Barton refused to have a DNA test done or to acknowledge Archer.  Alanna never felt that it was fair to Archer (there is also a rumor of Alanna having an affair with Archer)!  Of course, there are many people that did not like Alanna.  She was pleasant in front of Ace, but Alanna could be a viper. Alanna owned a beautiful cat, Mirabelle whom she treated horribly (kept her in a little closet with no food, water, or bed).  Since Twyla is allergic to cats, Caprice agrees to take care of her.   There is a long list of suspects for Caprice to wade through and figure out who really killed Alanna Goodwin.

Caprice also has to deal with her love interests, Seth Randolph and Grant Weatherford.   Seth is a doctor who took a job in another town.  Caprice has not seen him since the Valentine’s Day dance.  Grant has yet to ask Caprice on a real date, but Caprice has strong feelings for Grant.  Grant is finally ready to start dating again when Seth shows up.  Caprice needs to make a choice.  Who will Caprice pick?

Drape Expectations was an excellent book!  I could not put this book down.  The author did a great job with the mysteries (the guitars and music as well as Alanna’s murder).  I especially loved how Karen Rose Smith handled the murder mystery (she actually made me doubt myself).  You will have to be very clever to figure out who killed Alanna Goodwin.  I was glad that Caprice finally makes a choice between her two loves interests.  Drape Expectations has fun, lovable characters, a fantastic mystery, cute animals, and romance.  I give Drape Expectations 5 out of 5 stars.  The rating is well deserved for this superbly written book. The next book in the series is Silence of the Lamps.  It will be out in May 2016.  The first three books in the series are:  Staged to Death (currently $1.99 on Amazon), Deadly Decor (currently $1.99 on Amazon), and Gilt by Association.

I received a complimentary copy of Drape Expectations from NetGalley in exchange for an honest review.  The review and opinions expressed are my own.

Karen Rose Smith will be hosting a special event on Facebook tonight in honor of Drape Expectations.  If you get a chance, check it out.  I hope you have a lovely and dry afternoon!  Happy Reading!