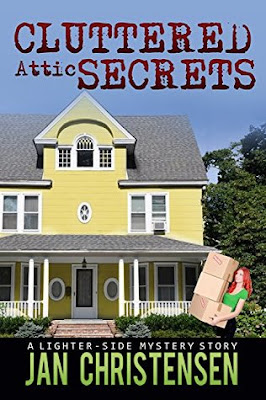 Hello and welcome back.  A person on Facebook asked if you give a book a positive review and say you like it, then why does the reviewer only give the book 4 stars.  To me 4 stars is liking a book.  If I give a book 5 stars, I love it!  Each reviewer has different criteria they use when rating a book, but this is mine.  I have to really love and enjoy all aspects of the book in order to give it a 5 star rating.

Cluttered Attic Secrets by Jan Christensen is a part of the Tina Tales.  Tina Show is now a professional organizer (no website, no advertising, which means no jobs right now) in Newport, Rhode Island.  Her best friend, Leslie Young has moved into her new home (that she has inherited from her Aunt Margaret).  Leslie calls her late one night stating she has seen something in the attic and is scared.  Tina rushes over, but does not see anything that night.  Over time, though, they both hear noises from the attic.  The girls call over Hank Silver (Tina’s boyfriend) and Brandon Young (Leslie’s brother and Tina’s former boyfriend—awkward).

When they hear the noises as well, they are determined to figure out what is going on.  Then Brandon gets hit over the head and left unconscious.  Leslie has everyone clear out of the house and she goes to stay with her parents (this part makes absolutely no sense).  They know it is not a ghost (since none of them believe in the supernatural), but how is someone getting into the house.  If Leslie wants to live in her house again, they will have to find out what is going on in her house.  They consult an architect to see if there are any secret rooms in the house.  There are a lot of older homes in the area and many of them do contain hidden rooms (underground railroad and were also used during prohibition).  Turns out to be several rooms hidden within the house.  They are outfitted with plumbing, beds, and storage cupboards.  What has been going on in this house?  Did Leslie’s Aunt Margaret know about the secret rooms?

Tina and Hank are still in the early stages of their relationship.  Hank is very secretive of his job and Tina has to decide if she can handle that secrecy.  Tina, Brandon, Hank, and Leslie along with the local police work to find out what is happening in the secret rooms.  Is it limited to Leslie’s house?  Cluttered Attic Secrets is a cute cozy mystery novel. I give Cluttered Attic Secrets 4 out of 5 stars.  It is easy to read with characters that are relatable (they are like everyday people in the world).  This book can be read as a stand-alone, though, there were a couple of references (an example is previous boyfriend that is mentioned a couple of times) that are not explained in this book.  The one thing I did not understand was Leslie (she was scared of her own shadow).  She was all for the investigation, and then she would put a halt to it (and hide out at her parents house).  She was a contradictory character.  Other books in the series are Organized to Death and Buried Under Clutter.  Cluttered Attic Secrets and Buried Under Clutter are available on Kindle Unlimited!

I received a complimentary copy of Cluttered Attic Secrets from NetGalley in exchange for an honest review.  The review and opinions expressed are my own.

Thank you so much for stopping by and reading my latest review.  I am off to figure out dinner and then finish Drape Expectations!  I want to see if I am right about the identity of the killer!  Have a nice, lazy evening (try) and Happy Reading!

Posted by Kris Anderson, The Avid Reader at 6:28 PM