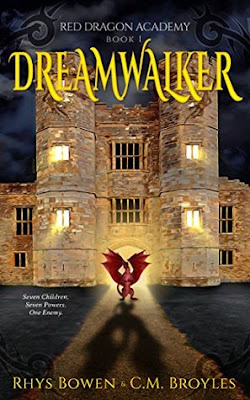 Happy Tuesday!  I have been busy with housework today (sweeping, dusting, laundry, taking out the recycling, etc.).  Tomorrow I have errands to run before my mother's birthday on Thursday!  She will be 70 years old!  I have the gifts, but I need to pick up the cake and get her a card.  I will also be cooking her favorite dinner for her (chicken and noodles from scratch).  My mother wanted a vampire cake this year (she is reading the Sookie Stackhouse novels).


Dreamwalker by Rhys Bowen and C.M. Broyles is a cute and magical children’s book.  Addison “Addy” Walker just lost her mother.  Her aunt, Jean Walker, is her new guardian.  Addy has to move to England (from California) and go to boarding school (her aunt is an executive who travels frequently).  Addy has been having strange dreams (which her mother said were psychic or prophetic), but does not know what to make of them.  Then while her aunt is looking up various boarding schools, she gets a pop up for the Red Dragon Academy in Wales (now Addy’s dream about whales makes sense).  Since they are willing to accept new students (it is October), Aunt Jean hustles them onto the next train.

Aunt Jean likes the school (likes that they will take Addy immediately) and leaves Addy in their capable hands.  Addy discovers that the headmistress, Miss Neves has a pin just like Addy’s necklace (dragon with stones).  Do you think it is a coincidence?  Addy makes friends with her roommates Celeste du Bois (who is French and her mother is an opera singer) and Phillippa “Pippa” Masters (from Kent).  Turns out that all the girls were adopted (another coincidence or part of the bigger picture).   Addy’s dreams have been taking her to some unusual places.  A place where everyone wears white and there is a mean man named Lord Grymur.  He was not very happy to see Addy and ordered her captured.  Thankfully, Addy wakes up before she can be captured.  Who is Lord Grymur?  How could he hear Addy’s thoughts?  Was it a dream?  Addy also sees a little red-headed girl named Twigg in one of her dreams.  The girl is so helpful and friendly.  Then Addy wanders down a supposedly haunted corridor.  Her eyes do something strange and she is on the other side of the mirror.  She runs into Twigg who helps her.  Twigg mentions being a Fareeth.  What is a Fareeth?  Is this part of the school (Addy cannot quite wrap her head around the part about the mirror yet)?  Why are the children scared in this part of the school?  Why does know one wear green?  Something strange is going on.

I received a complimentary copy of Dreamwalker in exchange for an honest review.  The review and opinions expressed are my own.

Thank you for checking out my latest review.  I am supposed to be reading The Watchmaker on Filigree Street by Natasha Pulley (I started it), but I got distracted by Spellcasting in Silk by Juliet Blackwell.  I just could help myself (I love this series).  I will let you know how I enjoy both books!  Have a quiet and relaxing evening!  Happy Reading!

Posted by Kris Anderson, The Avid Reader at 6:51 PM