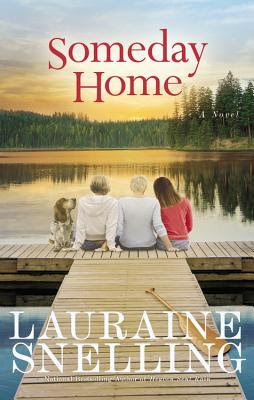 The mosquitoes are out in full force tonight.  I was putting chicken on the grill and getting eaten alive (did I mention I am allergic to bug bites).  They are going to itch for days (I am also allergic to bug spray and most remedies to put on bug bites).  I wanted to tell you about a fabulous book that came out today.

Lauraine Snelling has done it again with Someday Home.  Someday Home is a contemporary Christian novel about three women in the 40’s and early 50’s.  Marlynn “Lynn” Lundberg lives in Lake Barnett, Minnesota.  She lost her husband one year and nine months ago (not that she is keeping track).  Her big, log home on the lake seems empty since her husband died and her three children have left the nest.  Lately, Lynn has been experiencing times when she gets really hot, short temper, gets weepy, night sweats, trouble sleeping, and experiencing memory issues (as soon as I read the symptoms I knew what was wrong with her).  Lynn does not know what is wrong with her, but at the prodding of her kids, she goes to the doctor.  Lynn is going through menopause.  Lynn’s family is very close.  Lynn and her two sons runs the family plumbing business.  Her daughter, Lillian is a teacher.  Her son, Phillip and his family live on the same land as Lynn’s home and the business.  Lynn does not to build a smaller home for herself.  Her doctor recommends house sharing.  It is not a new concept, but it is becoming more popular.  After some research and consulting with her family, Lynn decides that God is leading her to do house sharing.  She also feels that the right people will come along to live in the house.

Angela Bishop is celebrating her twenty-fifth wedding anniversary with her husband, Jack.  Angela has worked hard to be the type of woman her husband wants on his arm (thin, well dressed, nails and hair done, and a successful job).  After eating their anniversary dinner at a very expensive restaurant, her husband tells her that he filed for divorce that morning.  Angela is stunned.  She did not see this coming (all the signs were there though).  Angela is fifty-one and does not know what she is going to do now.

Judith Rutherford is forty-seven years old.  She has been taking care of her parents for over twenty years.  Her parents always promised her that she would be taken care of when they passed away.  Her mother died five years previously and her father just passed away.  Judith has found out that the family home and furnishing have been left in a trust to turn the property into a living history museum (of what life was like in the early 1900’s).  Judith received nothing.  She can, though, stay on as caretaker of the museum (gee, isn’t that just swell of them).  Judith has a small inheritance that she received from a grandmother and any furnishing in the house that she purchased (how generous of them).  Judith’s cousin, Melody tells Judith to make her dreams come true.  What has Judith dreamed of doing?  What does she want to do now that she is free?

Lynn meets Judith at a quilting expo (where there are hundreds of people).  Lynn feels that Judith and her met for a reason and suggests that Judith come check out the house.  Lynn’s son, Tom and Angela’s son, Charlie are old friends.  When Charlie hears about the shared housing, he mentions it to his mother.  The two women move into the house and they start their new lives.  Lynn is going to have some big adjustments.  She is going to have to learn to not micromanage Judith and Angela (or mother them).  Lynn tells them that this is all of their home and she is going to come to regret those words (for a little while) especially when Judith buys a big chicken house (and then sets out to find some chickens).  Judith enrolls in the university and loves her classes (except pre-calculus where she needs a little extra help).  Judith always wanted to be an anthropologist.  Angela has to decide what she wants to do.  Real estate is not something she really enjoys.  Her fondest memories of working the school library when her children where younger.  Angela volunteers at the local library and enjoys it.  Can it lead to a full-time job?  Can three women who will all be going through menopause (at some point) live together happily?

Someday Home is a beautifully crafted story.  It is nice that someone has written a story about women in the 40’s and early 50’s getting a second chance at life.  I give Someday Home 5 out of 5 stars.  The story has relatable characters, a beautiful setting, dogs, a cat, chickens, family, and laughter.  I liked how Ms. Snelling handled Lynn and her menopause.  As someone going through menopause, I know how difficult and frustrating it is (hot flashes, short temper, memory issues, night sweats).  Someday Home is an incredible book by an amazing writer.

I received a complimentary copy of Someday Home from NetGalley in exchange for an honest review.  The review and opinions expressed are my own.

Thank you for stopping by and reading my review of Someday Home.  I wanted to tell you about a new book (will not be out until next year) that is for sale on Amazon (pre-order).  It is called The Perfectly Proper Paranormal Museum by Kirsten Weiss (ebook version will be listed later).   It looks like it will be an enjoyable new cozy!  Have a relaxing evening and Happy Reading!