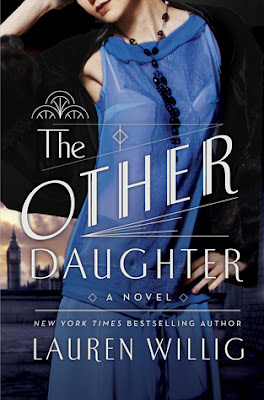 I am trying to post this review with my dog, Doozy climbing on my desk.  He is over sixty pounds and very tall (and pushy).  He is trying to get a bone out of me (he just ate dinner).  His big paws do not go well with my keyboard (and now I am getting licked to death).

The Other Daughter by Lauren Willig is an historical romance novel set in 1927.  Rachel Woodley is a governess for the three children of the Comtes de Brillac in France.  She receives a telegram (four days after it was sent because of a horrible valet) that her mother is ill with the influenza and she needs to return home immediately.  Since her boss refuses to let her leave (can you imagine), Rachel is forced to quit her job and head home immediately.  Unfortunately, she is too late.  Her mother passed away and was buried the day before (that is just rude)!  In her mother’s room Rachel discovers a picture of man that looks like her father on the cover of the Tatler (gossip rag).  Rachel had been told that her father passed away twenty-three years previously when she was four years old.  Is this man really her father?  It states his name is Edward Standish, Earl of Ardmore.  Rachel thought her father was Edward Woodley, a botanist.

Rachel goes to her Cousin David for answers.  Turns out that Cousin David is related to her father, not her mother.  Rachel’s father is very much alive.  Edward was the second son of the Earl and grew up with Katherine and David.  Edward and Katherine fell in love.  When Edward’s elder brother (Marcus) died, Edward had to step up.  In order to save the estate (Edward’s father did not manage it well), Edward needed to marry an heiress.  So one night Katherine took Rachel and disappeared (but what was Edward told).  Rachel is offered an opportunity to get into society and meet her father.  Turns out she has a half-sister and half-brother as well.  Simon Montfort is a gossip columnist for the Daily Yell.  He offers to help Rachel.  He gives her a new name (Vera Merton) with a backstory that she is a distant cousin (he has a lot of cousins) that has been taking care of her mother in France.  Simon gets her a wardrobe (from his sister who is in America), a flat to stay in (his mothers who is also in America), and a new hair style (flapper look).  Simon then starts taking her out to parties.  Rachel decides she wants to get revenge on her father.  Rachel believes that he has ignored her the past twenty-three years.  Will Rachel be happy when she finally gets answers?  Rachel meets her half-sister, Olivia and her fiancé, John Trevannion (a politician).  Olivia is very quiet and under the thumb of her domineering mother (she is an awful woman).

Rachel is setting herself up for disappointment.  She is getting a chance to see how the other half lives.  How she would have lived if things had turned out differently for her parents.  Rachel also gets a chance at love if she decides to pursue it.  I liked The Other Daughter, but did not love it.  It was a very cliché novel.  I knew what was going to happen, but I kept hoping for a twist (I was disappointed).  The writing is in a nice, conversational style which makes The Other Daughter easy to read.  I give The Other Daughter 3 out of 5 stars.

I received a complimentary copy of The Other Daughter from NetGalley in exchange for an honest review.  The review and opinions expressed are my own.

I am off to figure out dinner.  We are all currently tired of everything (makes it difficult).  Have a relaxing and fun evening! Happy Reading!

Posted by Kris Anderson, The Avid Reader at 6:00 PM