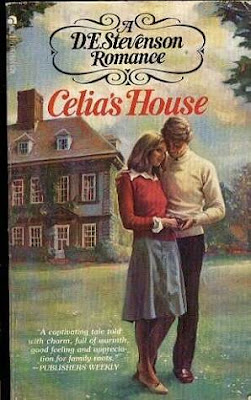 Welcome Back!  It is almost the Fourth of July.  When I was little I used to dread this weekend.  It was the time for the Anderson family reunion.  All the Anderson's got together at one home for the whole day!  I was very shy as a child and preferred to read a book rather than play (which drove my aunt's and uncle's crazy).  I would find a good spot, get comfortable, open my book when someone would drag me out and tell me to play.  What was wrong with wanting to read a book?  I was enriching my mind!  I was so happy when we moved to Florida and could no longer attend the reunions (except the years my parents drove us back to attend)!

Celia’s House by D.E. Stevenson is a historical story set in Scotland starting in 1901.  Celia Dunne is ninety years old in June 1901.  Maurice Dunne and his wife, Nina have always thought that Dunnian House would go to them when Celia passed away.  Celia has a different idea.  She has decided to leave the house to Humphrey Dunne.  Celia has certain conditions though.  Humphrey could live in the house for his life and then the house would go to his daughter, Celia (Humphrey did not have a daughter named Celia).  Miss Celia Dunne was certain he would have another child (a girl).  Since Dunnian House was not entailed, Celia could leave to whom she wished.  Humphrey was a navy man who spent most of time away from home.  Humphrey was sure his wife, Alice would love have a permanent home for her and the children.

Celia Dunne lived until September of 1901.  Maurice and Nina were livid when they found out that they were not getting Dunnian House (they had such awful plans for the beautiful home).  Alice loved the home and staff.  Humphrey’s oldest son, Mark loves Dunnian House.  He was saddened when he found out that it would not go to him (Mark became a doctor instead).  Humphrey and Celia did have another daughter whom they named Celia (and she happened to look a lot like the elder Miss Celia Dunne).  The book follows the family (Humphrey and Alice as well as their children as well as their young cousin, Deb) as they grow up and live at Dunnian house through 1942.

Celia’s House is a charming and pleasant story.  The book was written and published in 1943 (which you can tell from reading the book).  I give Celia’s House 3.5 out of 5 stars.    It is a sweet story that does not contain sex, foul language (maybe a word or two), or violence.  I wish I had discovered this book when I was younger (it is the type of book that I would have read and appreciated when I was 12 or 13).  The book has a nice flow, but it lacked something (hard to explain).  The book needed something more for the modern reader that would capture their interest and hold them.  Celia's House will be out on July 7, 2015.

I received a complimentary copy of Celia's House from NetGalley in exchange for an honest review.  The review and opinions expressed are my own.

Thank you for stopping by and reading my review.  I am off to do my grocery shopping.  I have to stock up for the Fourth of July.  Plus Doozy (my dog) is out of bones (keeps him from chewing on the wrong items).  I am having success with his training.  I have discovered he is afraid of spray bottles.  I keep one handy with water in it for training purposes.  Have a great afternoon and Happy Reading!