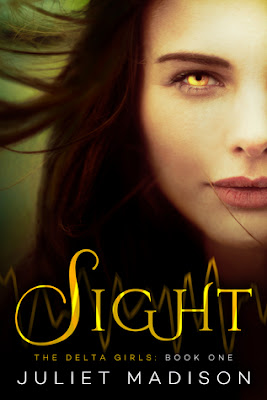 I hope everyone is having a delightful and relaxing Sunday!  I was being with laundry, cooking Sunday dinner, feeding the cats and dogs, cleaning up dinner, and so on.  It seems that no matter how much cleaning a person does there is still more to do!  We need cleaning robots!  I just read about a hotel in Japan that utilizes robots.  The doors open with face recognition (since robots cannot chase down keys).  They are using the robots to cut down on the cost of the hotel rooms.  It was an interesting article.

Sight by Juliet Madison is the first book in The Delta Girls series.  Savannah Delcarta is almost sixteen years old and has an aneurysm in her brain that needs to be removed.  The surgery goes well, but Savannah is left in a coma for two months.  Just before she wakes up, Savannah feels a strange sensation (like bubbles rising through her body) and then she gets a vision of a scene at the beach.  Savannah awakens to find her four sisters surrounding her.  Savannah is a triplet.  Thankfully, they are not identical (their poor mother).  There is Sasha (six minutes older than Savnnah) and Serena (two minutes older than Savannah).  In addition they have two older sisters:  Talia and Tamara (twins).

A few months later they are moving into their new home at 3 Roach Place (what an awful name for a street).  Their mother, Rose decided they needed a new start and moved them to a new town (near the beach).  The girls are at the beach and a volleyball game is in progress.  They all gasp at the same time.  Just before Savannah woke up, this was what she saw.  Turns out that all the girls had a similar sensation and vision (sort of).  Each girl received a different sense (the five senses—see, taste, smell, hear, and touch).  After some experimenting, the girls figure out how their new gifts work.  There have been fires set around the town, but the police cannot figure out who is setting them.  When the girls start seeing visions about the fires, they try to solve the case.

Savannah gets her first boyfriend in the boy across the street.  His name is Riley Pearce and he plays volleyball.  He is being raised by his older brother since the death of his parents.  Riley has a lot anger inside over the death of his father.  He believes his father killed himself.  Savannah, in addition to the visions, starts seeing ghosts.  The first one is Riley’s father.  Will Riley believe her or push or her away?  Savannah can help Riley come to grips with his father’s death and move on with his life.  Savannah will also get a chance to help her own family when she sees a familiar face (a ghost, of course).

I give Sight 3 out of 5 stars.  It is an interesting story, but I think the author could have done so much more with the girls abilities (maybe she will since this is the first book in the series).  The book contains the requisite teenage romance with its ups, downs, and misunderstandings.  I did not understand why the girls were not more curious to explore their abilities at the beginning or how their mother could be so oblivious.  I think the series has possibilities and it will be interesting to see what the author does. This novel will appeal more to young adults and teenagers. The next book in the series is scheduled to come out in October.

I received a complimentary copy of Sight from NetGalley in exchange for an honest review.  The review and opinions expressed are my own.

Please have a nice, relaxing evening.  I do appreciate all of you that take the time to read my book reviews.  Happy Reading!

Posted by Kris Anderson, The Avid Reader at 7:27 PM