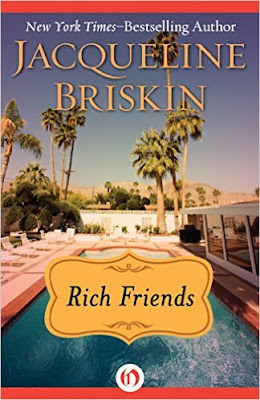 Before we get into the review, I wanted to share something with you.  When I pick a book for reviewing, I do not research the book.  I pick the book based on a description.  I do not want my opinion of the book to be influenced (especially before I read it).  After I finish a book is when I do research (is the book a part of a series, authors other novels, etc.).  So when I picked Rich Friends (the novel I am reviewing today) for reading and reviewing, I did not know it was not a new release.  I have also found out that Jacqueline Briskin passed away in 2014.

I just finished the newly re-released 1976 novel Rich Friends by Jacqueline Briskin.  The first third of the novel tells the story of Em, Beverly, and Caroline (it is very important to note that Caroline and Em are sisters).  It starts in 1946 (just after World War II) with the marriage of Em and Sheridan.  Sheridan is going to college on the GI Bill to become a pharmacist.  Em becomes pregnant on their honeymoon and gives birth to twin boys, Vlief (short for Van Vlief) and Roger.  Beverly Linde comes from an assimilated Jewish family (they are Jewish, but do not flaunt it).  Beverly falls for a nice Catholic boy and her family does not approve (makes no sense since the family does not go to Temple, follow Jewish holidays, etc.).  They send Beverly to New York where she meets Dan G, an orthodox Jew.  Things do not work out between them and they go their separate ways (for now).  Beverly marries Phillip and they have two children (their daughter, Alix and their son, Jamie).  However, twelve years later Dan and Beverly meet again.  After an affair and a break-up, they cannot live without each other.  Two divorces ensue and then a marriage (they later end up having a son named Sam).  Caroline marries Gene Matheny who wants to be a writer (and teach at the university).  Unfortunately, the college is requiring that all employees sign a loyalty oath.  Gene refuses to sign and is fired.  Gene goes into the Van Vliet grocery business (and is quite good at it).  Caroline and Gene have one daughter, Cricket (nickname).    The couples grow apart until the unthinkable happens.  Jamie is murdered by a man who thinks Dan cheated him out of money in a land deal.  This incident will alter many of their lives.

Alix, Vlief, Roger, and Cricket are the main focus of the remaining two-thirds of the novel (it is a very long book).   Roger and Vlief are coming home from Harvard for the summer and Cricket wants them all to get together.  Alix falls for Roger.  Roger is interested, but he is not comfortable around her (I do not get it).  Alix starts going out with Vlief.  Cricket (high school graduate and 16) is in love with Vlief.  Vlief and Alix go out until Roger and Alix spend a day together.  Alix breaks up with Vlief.  Vlief who was going to medical school, drops out, and goes to work at Van Vlief grocery chain.  Alix and Roger go back East and live together while Roger finishes medical school (his mother is not happy).  Cricket is a hippie type of girl who likes photography.  After spending one night with Vlief (the night Alix broke up with him) Cricket becomes pregnant.  She ends up spending time at a commune.  Unfortunately, the baby is born early and does not survive.  Cricket does not tell Vlief about this for many years.  Several years later the four of them go to Carmel together.  Cricket encounters her commune friends.  One of the, Orion has a type of sore on his face that Roger diagnoses as skin cancer.  The commune leader does not believe in getting medical care.  Roger convinces Orion to get treatment and he is thrown out of the commune.  This one act leads to three deaths.

Rich Friends contains every cliché you can imagine from the 50's and 60's.  In the 50’s girls went to college (joined sororities) and supposed to get married and have babies.  The 60’s sexual revolution, communes, protests, etc. The book is very stilted and choppy (lacks flow) going from one event to another.  I am afraid that I did not enjoy reading this novel (even the ending was a big letdown).  I give Rich Friends 1.5 out of 5 stars.   This is one novel that did not need to be published again!

I received a complimentary copy of Rich Friends from NetGalley in exchange for an honest review.  The review and opinions expressed are my own.

Thank you for checking out my newest review.  Have a great Saturday evening and Happy Reading!