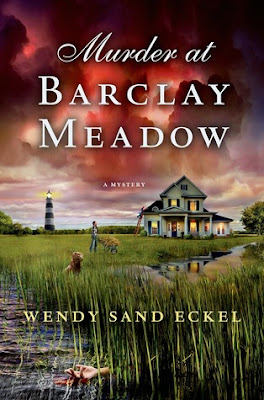 I want to tell you about a new cozy mystery that will be coming out in October.  Murder at Redwood Cove by Janet Finsilver is the first book in a new series.  I am looking forward to reading it.  It is available for pre-order on Amazon.

Murder at Barclay Meadow by Wendy Sand Eckel is a cozy mystery set in Cardigan.  Rosalie Hart does not know what to do with herself now that she does not have a daughter and husband.  Her daughter is now at college and has gotten her to open up a Facebook account.  Her husband, Ed has fallen in love with a younger woman and wants a divorce.  Rosalie decided to move to Barclay Farm that she inherited several years ago.  Ed wanted her to sell the farm, but it is a part of her family’s history.  The Cardigan River runs behind her two hundred year old home.  While walking along the river one day, Rosalie finds the body of a young woman.

The young woman is Megan Johnston who was a college senior at John Adams College.  She was wearing a black cocktail dress and had her Vera Bradley backpack on her back.  When the incident is ruled an accident, Rosalie starts looking for answers (she just knows there is no way it was an accident).  Sheriff Joe Wilgus is not happy with Rosalie’s involvement.  He is a mean, nasty, and a bully.  He warns Rosalie to leave the case alone (you know she will keep investigating).  Megan gets help from the students in her memoir writing class that she is taking at John Adams College.  Glenn Breckinridge, Tony Ricci, and Sue Ling help Rosalie get answers.  They call themselves the What Ifs (and set up a Facebook group).  They start by looking at her Facebook page (Sue is good at hacking) and her life on campus.  Dr. Nicholas Angeles is the psychology professor at the college, received a big grant (to study sex), and he was having an affair with Megan.  Rhonda Pendleton is a friend of Megan’s parents and her daughter was a friend of Megan’s.  Rhonda also had an affair with Megan’s stepfather, Bill.  Bill Johnston, Megan’s stepfather, was very controlling and kept a close eye on Megan.  Then there is the stalker as well as the college president.  Who wanted Megan dead and why?

Rosalie also has to deal with her husband, Ed and the divorce.  Ed decides he wants Rosalie to sell the farm and freezes all their bank accounts as well as their credit cards (good thing she has some money from her aunt).  Their daughter, Annie is not handling the news of the divorce very well and Ed is unhelpful (unless it benefits him).  One day Tyler Wells stops by the house.  He used to rent the farm land from Rosalie’s Aunt Charlotte (Rosalie neglected the farm after her aunt’s death).  Tyler would like to rent the fields again.  Tyler also gets hired as Rosalie’s handy man (the house needs work).  They soon start spending a lot of time together.  Rosalie, though, needs to get over her ex-husband, Ed before she can have a future.

Murder at Barclay Meadow was a good book, but not great.  I found Rosalie to be very wishy washy (especially concerning her husband and daughter).   Who would want to go back to a man that said he no longer loved you?  I really disliked the character of Sheriff Joe Wilgus.  I hope he will not be in future books.  I liked the mystery in the book (though it was a cinch to solve) and the What Ifs.  I could have done without the Facebook chats, but that is very much a part of our society.  I give Murder at Barclay Meadow 3 out of 5 stars (which means it was okay).  If there is a next book in the series, I will give it a try to see if the writer has improved.  The series has possibilities it just needs a little work.

I received a complimentary copy of Murder at Barclay Meadow from NetGalley in exchange for an honest review.  The review and opinions expressed are my own.

I am going to go eat dinner and read my book.  I hope you have a relaxing evening.  Happy Reading!

Posted by Kris Anderson, The Avid Reader at 6:49 PM