The Case of the Dotty Dowager 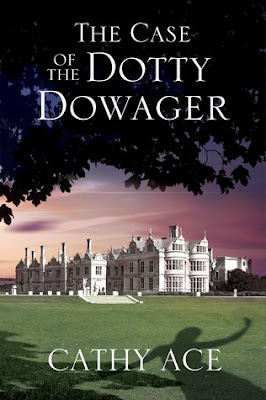 The beginning of another week!  I have been enjoying the Hallmark Channel's Christmas movies!  I am looking forward to their new Christmas movie on Saturday.  I do not know what it is about the movies, but I just love watching them!  There were a lot of fireworks going off in our neighborhood.  I thought the rain would curtail them (and since they are illegal in our county), but I was wrong.  My poor dogs and cats were huddled in fear.  I felt so bad for them.  I hope everyone had a lovely Fourth of July!  I cooked on our grill (hamburgers, hot dogs, and steak) and we also had cole slaw, corn on the cob, watermelon, and apple pie.  My daughter, Betsy, came over to enjoy the dinner.  I am still getting used to the grill.  I need to learn to turn the flame down very low (or I burn the food)!

The Case of The Dotty Dowager by Cathy Ace was a fun British cozy mystery.  Henry Devereaux Twyst is the 18th Duke of Chellingworth.  He was not raised to be the Duke.  He was enjoying his life of painting watercolors until his older brother died.  Now Henry is responsible for Chellingworth Hall (in Wales).  Henry gets a late night call from his mother, Althea (Dowager Duchess of Chellingworth).  Althea swears there is a dead man in her dining room.  She called her son instead of waking up any of her staff (she has a cook, lady’s aide, and gardener/handy man).  When Henry arrives at the house, he finds it locked up tight with the alarm on.  Althea is in her bedroom with her dog, McFli and a fireplace poker in her hand.  The body is gone!  All that remains is a bobble hat that Althea picked up and took with her to her bedroom.  Henry doubts his mother actually saw a body (he has been hearing rumors that she has been talking to herself).

Henry awakens the staff.  All of them were sleeping very deeply and were hard to awaken.  None of them heard a thing.  The police are called the next day, but they do not believe the Dowager Duchess.  Henry decides to call the WISE Enquiries Agency (they think detective sounds to American).  Annie Parker, Mavis MacDonald, Carol Hill, and Christine Wilsom-Smythe make up the agency.  Their individual skills complement each other.  Carol is pregnant and cannot venture far from home.  Her job is getting information (online and via phone) as well as keeping them all updated.  Mavis will stay with the Dowager, Christine will visit Henry at Chellingworth Hall, and Annie will go to the local village.  Each will investigate and keep the others updated.  Did Althea see a dead body in her dining room?  If so, where did it go?  And most importantly, why were they in the Dower House?

The Case of the Dotty Dowager was an amusing British cozy.  I give The Case of the Dotty Dowager 4 out of 5 stars.  I liked the nice mix of characters as well as the lovely setting.  I did not, though, like Annie Parker’s character.  I found her very abrasive and hard to understand.  She has such a thick accent that it is hard to figure out what she is saying.  Mavis’ Scottish accent was much easier to figure out (of course, I have been watching a lot of Outlander).  I think if Annie’s was toned down just a little, she would be a more pleasing character (they have her as loud, clumsy, and rude).  Overall, The Case of the Dotty Dowager had good writing, great mystery, lovely town, and some interesting characters.  If you like cozy mysteries, you will enjoy this British cozy!

I received The Case of the Dotty Dowager from NetGalley in exchange for an honest review.  The review and opinions expressed are my own.

I am currently reading The Invention of Wings by Sue Monk Kidd (really enjoying it).  Have a relaxing Sunday afternoon and Happy Reading!

Posted by Kris Anderson, The Avid Reader at 3:47 PM