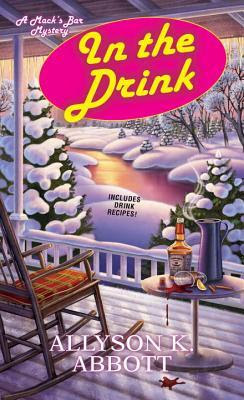 It took me a while, but I came up with something positive to say about the rain!  Pulling weeds is much easier with the ground so wet from the rain (not the best, but it is positive).  I went to get the mail and found a package on the front porch.  As you can probably guess it was sopping wet from the rain (I do not know when it arrived).  It was important papers from the mortgage company and they are just mush (came in a cardboard envelope).  I need to get some type of big water proof mailbox for the front porch! Somewhere for the delivery people (UPS, Fedex, and the mail carrier) to put packages (I think it is a good idea).


In the Drink by Allyson K. Abbott is the third book in the Mack’s Bar Mystery series.  Mackenzie “Mack” Dalton has grown up in Mack’s Bar.  Her mother died before she was born (was kept in a coma until Mack could be born safely) and she was raised by her father.  Her father has been gone almost a year.  Mack has just finished expanding the bar and adding a games room as well as a room for the Capone Club (a group of bar patrons that like to solve mysteries and crimes).  Mack has been dating Duncan Albright a cop she met a year ago.  However, since it came to light that she helped with his last case, Mack has not seen much of Duncan.  Duncan got to keep his job, but he is not allowed to consult with Mack.

Mack has synesthesia.  It is a neurological disorder where her senses are cross-wired and her senses are highly acute (she can smell things that others cannot).  Mack is also good with math and letters.  Mack and Duncan make a good team (Duncan is good with deductive reasoning).  Mack, though, just received a threatening letter.  She has to solve the clues in the letter without help from the police or someone she knows will die.  Mack with help from the Capone Club as well as Duncan and a new friend, Malachi O’Reilly set out to follow the clues from letter to letter.

In addition, the Capone Club is working to solve the twelve year old case of two missing girls (Lori Gruber and Anna Hermann).  Lori Gruber was the sister of club member Tiny Gruber.  Tiny (whose real name is Jurgen) wants to find out what happened to his sister.  He needs closer.  The group will have their work cut out for them to solve this cold case and keep ahead of the killer.

In the Drink was a fun cozy mystery to read.  One thing that I did not like, though, was that the mystery of the letters was not solved in this book.  We have to wait until the next book for answers.  The murder mystery of Lori Gruber and Anna Hermann was a cinch to solve, but it was a good mystery.  I liked Mack’s unique disorder.  The author did a good job describing it and I like how the character uses her disorder (skill) to solve crimes.  I give In the Drink 4.5 out of 5.  This is the third book in the series, but can easily be read as a stand-alone book (it reviews the information from the previous two books).  The first two books in the series are:  Murder on the Rocks (currently $2.99 on Amazon) and Murder with a Twist (which is currently $1.99 on Amazon).

I received a complimentary copy of In the Drink from NetGalley in exchange for an honest review.  The review and opinions expressed are my own.

So many wonderful books and so little time to read them!  I am currently reading London from My Windows by Mary Carter.  Have a lovely evening and Happy Reading!