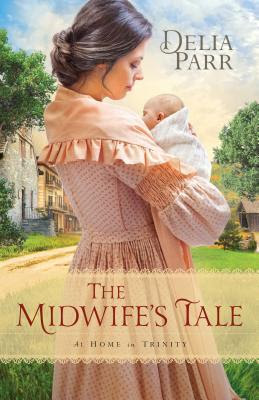 Why is it so hard to get moving on Monday's?  Instead of getting up, I just want to snuggle into my bed!  Of course, that does not get the house cleaned.  I got a package from UPS this morning and it came in a very big box.  I knew the cats would love that box as soon as I saw it (of course, cats love all boxes).  The cats filled up the box in less than a minute.  It reminded me of the clowns at the circus in the clown car.  How many cats can fit in one box?

The Midwife’s Tale by Delia Parr is a lovely Christina novel.  It is the first book in the At Home in Trinity series.  Martha Cade is a widow of ten years, has two children, and is the midwife for Trinity.  Martha learned to be a midwife from her grandmother who raised her after her parents passed away.  Martha is out delivering a baby at a homestead fifty miles from Trinity.  She has been gone for two weeks.  Just after the baby is born she receives a note from her brother, James Shock that her daughter, Victoria has taken off with a traveling theater troupe.  Victoria is only seventeen.  Martha is shocked and upset.  Martha’s brother had included a flyer from the theater troupe with their schedule on it.  Martha takes off after her daughter.

Three months later Martha returns home without her daughter.  She would arrive at each town a day late.  At the last stop Victoria either went to Charleston or sailed for England.  Martha was unable to verify Victoria’s destination.  Martha is hoping to resume her midwifery practice, until she finds out about the new doctor.  The old doctor was happy to let Martha do midwifery, while he mostly treated males and broken bones.  The new doctor, Dr. Benjamin McMillan is young and just graduated from a university.  He does not believe in midwives.  Martha will let the patients decide who they want to deliver their baby and hope that she can slowly change Dr. McMillan thinking.

There is a new Hampton Academy outside town.  The Reverend Ulysses Hampton and his wife, Olympia have opened a school for orphaned boys.  They brought boys from the streets of New York.  Martha believes it is a good idea and supports the school.  Many people in town are not happy with the school and want it gone.  Especially when things start going missing at places in and around town.  People are blaming the children at the Hampton Academy.  Martha sets out to find the real culprit (she is hoping to prove the boys innocent).  All the while Martha is hoping for information about her daughter.  She misses her very much and starts a journal for her.  Mayor Thomas Dillon is an old beau of Martha’s.  They dated before Martha and her husband.  Martha, though, did not think that she would be able to be a midwife if she married Thomas.  When Thomas proposed originally, Martha turned him down.  Now that both of them are single again (both of their spouses are dead), Thomas is seeking out Martha.  Martha feels a connection (or spark) with Thomas, but she is not sure she is ready (especially with her daughter missing).

Who is stealing items around town?  Will Martha’s daughter return home?  Will Dr. McMillan accept a midwife in town?  What will happen between Martha and Thomas?  I enjoyed reading The Midwife’s Tale.  It is a sweet story and a charming book to read.  It does get a little bit preachy at times.  There are a lot of passages from the Bible present in the book.  I liked the characters in this book as well as the setting.  Delia Parr is a good writer who has a knack for drawing the reader into her book.  I give The Midwife’s Tale 4 out of 5 stars.  I look forward to reading the next book in the series and finding out more about Martha’s daughter.

I received a complimentary copy of The Midwife’s Tale from NetGalley in exchange for an honest review.  The review and opinions expressed are my own.

I am currently reading A Promise of Grace by Lynette Sowell (I am enjoying it).  Take care and Happy Reading!