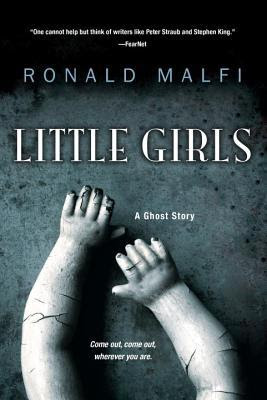 I reviewed a book a couple of months ago on Amazon called Silent Screams by Angela Marsons.  One man left a comment stating he does not trust reviews written by someone who received the book for free.  I gave the book 4 out of 5 stars.  It has led to 28 other comments.  My review of a book (or product) is the same whether I pay for it or I receive it for free.  I do not know why I was surprised by the comment, but I was.  I believe that reviewers should be honest about the book.  We are helping other people decide whether or not to purchase a book (or a product).  Leaving a dishonest review will not help anyone (and could lead to a short career as a reviewer).  What do you think?

Little Girls by Ronald Malfi is an unusual novel.  Laurie Genarro’s father just passed away.  He supposedly got past a padlocked lock and threw himself out of window (that was nailed shut).  The poor man had severe dementia at the end of life and it is assumed that he committed suicide.  Laurie has not returned to her father’s house since she was a teenager (her parents divorced when she was about ten).  Laurie does not really want to go to the house, but she needs to settle her father’s affairs.

Laurie is married to Ted (a playwright) and they have a ten year old daughter named Susan.  Susan and Ted like the house (despite no television, radio, or internet) and are looking forward to spending some time in Maryland (they are from Hartford, CT).  Laurie hears doors slam when no one is home and says she is hears whispering.  Her husband is really worried about her mental state.  Laurie had an incident last year while driving.  She was found in her car on the side of the highway in a fugue state (according to the doctor).  Laurie remembers nothing about the incident.  Then Laurie sees the little girl living next door.  Abigail Evans is spending the summer with her aunt and uncle while her parents are traveling in Greece.  Abigail looks like Sadie Russ who grew up next door to Laurie.  Sarah died in the greenhouse belonging to Laurie’s father.  Laurie swears Abigail looks just like Sadie (could she be Sadie?).  No one else can see the resemblance (Laurie found a photograph of the two of them when they were little).

Laurie starts checking to make sure doors are locked and windows are locked and shut.  She will not let Susan play with Abigail because she thinks Abigail is a bad influence.  Laurie is going through her father’s belongings and finds photographs of young girls.  Who are these girls and why did her father have the photos?  Is someone getting into the house?  What is going on with Laurie?  Did her father commit suicide?

Little Girls is a strange novel.  I like mystery, horror, and thriller stories, but this book just struck me as weird (and I do not like to use that word).  The ending does not really provide closure on the book.  I finished this book yesterday, and I am still trying to figure out Little Girls.  I give Little Girls 1.5 out of 5 stars (I am being generous).  Little Girls was just not the right book for me.

I received a complimentary copy of Little Girls from NetGalley in exchange for an honest review.  The review and opinions expressed are my own.

I hope you have a lovely Wednesday afternoon.  I am currently reading The Girl Who Wrote in Silk by Kelli Estes.  Happy Reading!

Posted by Kris Anderson, The Avid Reader at 2:49 PM