The Girl Who Wrote In Silk 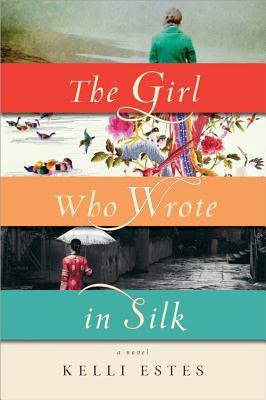 It is book release day!  Just after midnight I started getting some wonderful books on my Kindle (such a great invention).  Years ago I would have had to wait for them to come in the mail or go to the bookstore to pick them up (and paperback have such tiny print).  On a Kindle I can make the print any size I want (I have worn glasses since I was seven years old).  Today I am reviewing a fabulous book called The Girl Who Wrote in Silk!
I just finished a marvelous novel from Kelli Estes.  It is called The Girl Who Wrote in Silk.  I just loved this book and did not want it to end.  The book starts out in February 1886 in Puget Sound, Washington Territory.  Liu Mei Lien (Liu is her surname) works with her father in his shop in what is now Seattle in Washington Territory.  The white people in the area are not happy with the Chinese.  They do not like them coming in and taking their jobs.  Mei Lien dresses like a boy as protection when she is out in the city (a girl could be attacked).  One morning just after Mei Lien awakened there are white men outside their homes with weapons.  All the Chinese are being escorted out of the city to a ship called the Prince of the Pacific.  Mei Lien, her father, Liu Huang Fu, and her grandmother (who is frail) are forced onto the ship (and have to pay for passage).   The ship is to take them to San Francisco. Once the ship is underway Mei Lien overhears Duncan Campbell (owner of ship) talking about the Chinese on the ship. Campbell has no intention of allowing the Chinese to stay on his ship.  He is going to dump them into the water when they get far enough out.  When Mei Lien tells her father what is going to happen, he gives her his money bag and, when they are near the last island before open water, he pushes her off the ship.

Inara Erickson has just inherited her Aunt Dahlia’s estate on Orca Island called Rothesay (near Seattle, Washington).  Inara loved going their when she was younger before the death of her mother.  Inara has just graduated from graduate school (majored in business) and has a job lined up at Starbucks.    Inara is a descendant of Duncan Campbell.  Her family runs the business Campbell started.  It was originally called Campbell Lines but is now called Premier Maritime Group.  PMG is run by Charles Erickson (Inara’s father).  Charles has high expectations for his daughter.  He expects her to sell the estate and return to Seattle.  Inara is exploring the house when she discovers a loose step in Aunt Dahlia’s house (she lived in a little house behind Rothesay).  There is a cloth wrapped bundle in the step.  When Inara unwraps it she finds a beautifully embroidered blue silk sleeve.  It has lovely silk embroidery picturing scenes.  Inara would like to discover more about the sleeve.  She feels that it is important.  Inara calls Dr. Daniel Chin who teaches China studies.

I received a complimentary copy of The Girl Who Wrote in Silk from NetGalley in exchange for an honest review.  The review and opinions expressed are my own.

If you decide to read The Girl Who Wrote in Silk, I hope you enjoy it as much as I did.  Have a great afternoon and Happy Reading!